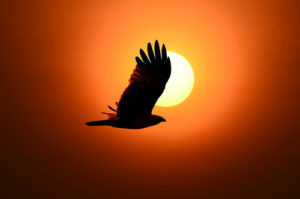 Shamanism is a tens-of-thousands of years old form of accessing guidance and impacting health and well-being for individuals and the community. It arose with a similar philosophy and techniques all over the globe – from Australia to Asia, Africa to North America, Europe to South America.

One of the core aspects of shamanism is a belief that everything has a spirit, including the plants, animals, elements, and even the land itself. Shamans and shamanic practitioners develop relationships with these spirits so that they can work together for the good of a community or an individual who comes to the shaman for help.

This working relationship with a spirit often begins with that spirit appearing to the shaman in a vision, a dream or even in waking life. In some cultures animal helpers could be inherited or exchanged, but more often the animal will volunteer itself such as in a dream.

From a shamanic perspective, animals or even plants who come into our dreams may be offering their wisdom or assistance. We in the United States do not currently live in a predominantly shamanic culture (though shamanic traditions in this area go back much further than our country’s existence and many of the people now living in the US have come from shamanic cultures), so animals in our dreams can have other associations and other meanings, too, but for now I want to focus on the shamanic perspective.

An animal may appear in your dream to offer you their help or to invite you into a working relationship. Some animal allies come to work with us in a particular way, for example, to assist with certain kinds of healing work. Other animals may appear to us because they are allies of a longer-term nature, voluntarily walking with us for many years or even our entire life to keep us physically, emotionally, and spiritually healthy. Sometimes called totem animals, power animals, or animal spirit guides, these are the animal equivalent of our guardian angels.

In some traditions a shaman would have just one primary animal ally their whole life; in other traditions they might have a number of them and they might change over the course of their lifetime. The animal spirit is understood to be not simply the spirit of one specific animal, but the spirit of the species – for example, not one particular eagle, but all eagles. It is also common for animal spirits to shape-shift into human forms and vice versa.

A shaman might call on an animal ally to protect them, to assist with healing work, or to give them information such as where to find food for the community, how to resolve an issue, or to show them the cause of someone’s illness.

These animal helpers also become guides for the shaman when they journey into the world behind the world. A journey is like a meditation, where a shaman sends their consciousness into non-ordinary reality, or what the Australian Aboriginals called “The Dreamtime.” On these excursions the animal ally assists the shaman in navigating these realms, helping them to find what they seek.

Animal spirits, along with ancestors, teachers, and others, may appear to us in dreams to let us know we are being called to develop ourselves spiritually – either to shamanic work specifically or to remind us that we are connected to all of creation. Traditionally, the calling or initiation into shamanic work would often come with a dream visitation by these helping spirits.

If you were to dream of an animal ally, it might be because they are acting in their role as tour guide and navigator. They might also be inviting you into a working relationship or offering their support. You might want to get to know the particular wisdom of that animal. Sometimes the animal’s strengths or traits are highlighted in the dream for you, at other times you may want to seek out a deeper understanding of the animal.

An animal may come to your dream to help answer a question you are pondering in your life. In this case, there may be a particular habit or ability of this animal that holds the key to the guidance you are seeking.

You can get to know the animal better by going into meditation and asking them to teach you about their nature. You can read about the symbolism of animals in books about animal spirit guides, but you will get more personally relevant information if you work with the animal spirit directly.

Many shamanic cultures believe it is possible to get separated from your animal guardian. Since our animal ally is believed to be an integral part of protecting us from illness, a low immune system is considered a sign that you may be in need of a power animal retrieval. Depression and fatigue can also be signs that one has lost power or would benefit from a power animal retrieval.

From this perspective, you may want to pay particular attention to the condition of animals in your dreams: are they sick, dying, or missing? If so, you may want to go back into the dream through meditation or shamanic journeying to tend to them.

In addition to meditation or journeying, developing and maintaining a relationship with animal spirits can be done through getting to know the animal’s habits, qualities, and strengths in waking life. You might want to do something to honor an animal who comes to you, such as putting up a picture of them or eating their favorite food.

You don’t have to practice shamanism to benefit from having an animal ally. You can call on your animal helpers in times of need, such as when you would like protection or if you’re not feeling well. It adds depth and spice to our lives to have a personal connection with the natural world and with the world of spirit that is often trying to assist us. I hope you enjoy getting to know your own animal allies better.

Want to join the discussion?
Feel free to contribute!

How to Be Truly Helpful

Removing Blocks in Your Energy Field
Scroll to top